The History of the Archdiocese of Seattle

The first resident priests arrived in the Pacific Northwest in 1838. They came at the invitation of Native Americans who heard of the “blackrobes” and sought their ministry, and for the white settlers living around the outposts of the Hudson’s Bay Company in the Northwest.

The first two priests were French-speaking Canadians: Francis Norbert Blanchet and Modeste Demers (later the first bishops of Portland and Vancouver Island, respectively). After an arduous journey lasting seven months, Fathers Blanchet and Demers reached Fort Vancouver and began preaching and celebrating the sacraments the very evening of their arrival. They offered missions throughout the region, learned some of the native languages, and soon translated the catechism, basic prayers and even favorite French hymns into Chinook Jargon, a pidgin language widely used by both Native peoples and white settlers. Father Blanchet developed the “Catholic ladder” as a way to communicate the story of salvation history in a simple, memorable way. These “ladders” were given to native leaders to teach their people. This inspired idea spread across the Northwest. 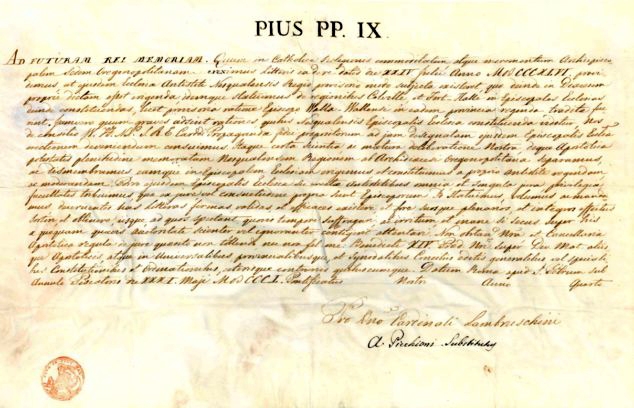 In 1846, Father Blanchet was named archbishop of Oregon City (later Portland) while his brother, Augustin Magloire Alexander Blanchet, was appointed bishop of Walla Walla. Bishop A.M.A. Blanchet arrived in Walla Walla in 1847, only to find himself caught up in tensions between Catholic and Protestant missionaries, and between white settlers and Native Americans. These tensions culminated in the Whitman massacre. Ultimately, the Diocese of Walla Walla was suppressed, and on May 31, 1850, the new Diocese of Nesqually, centered on what would later become Washington Territory, was officially established. The mission church of St. James in Vancouver became its cathedral. One of Bishop Blanchet’s first acts was to travel to Mexico on a “begging tour,” collecting funds and liturgical objects to furnish the fledgling church in the Northwest.

In 1856, five Sisters of Providence, led by the intrepid Mother Joseph of the Sacred Heart, journeyed from Montreal to Vancouver. They established schools, orphanages and hospitals. Mother Joseph became one of the most remarkable pioneers in the region, and her statue is one of two representing Washington state at the United States Capitol. 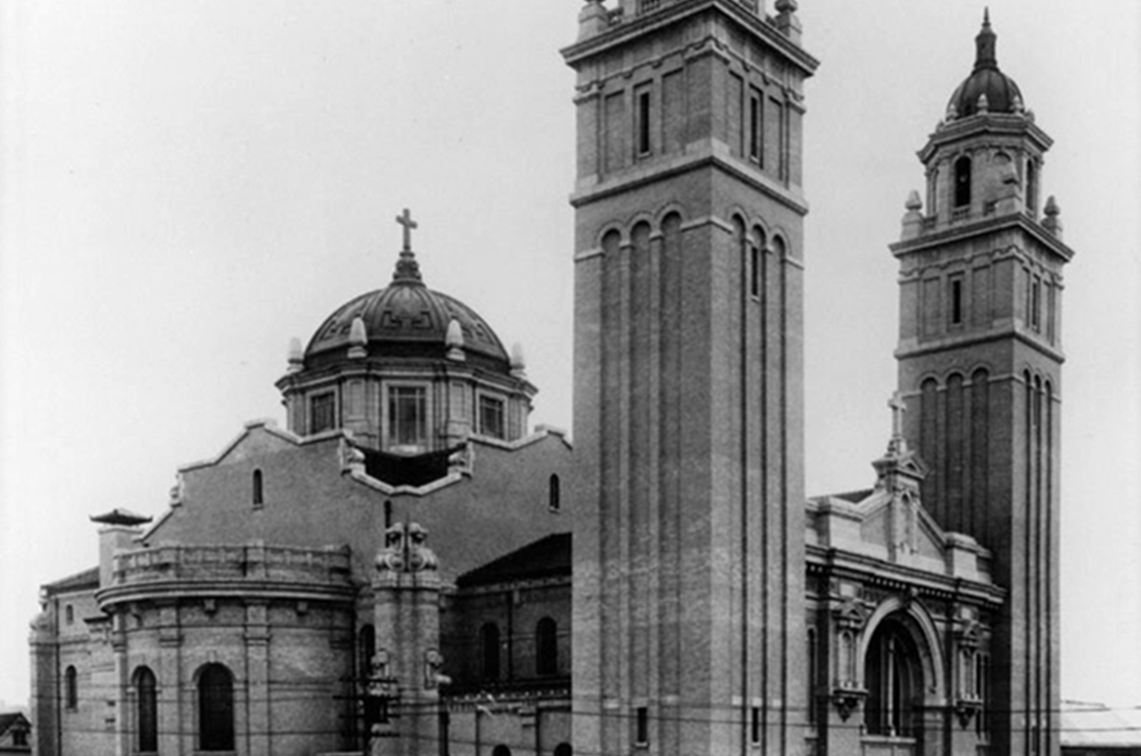 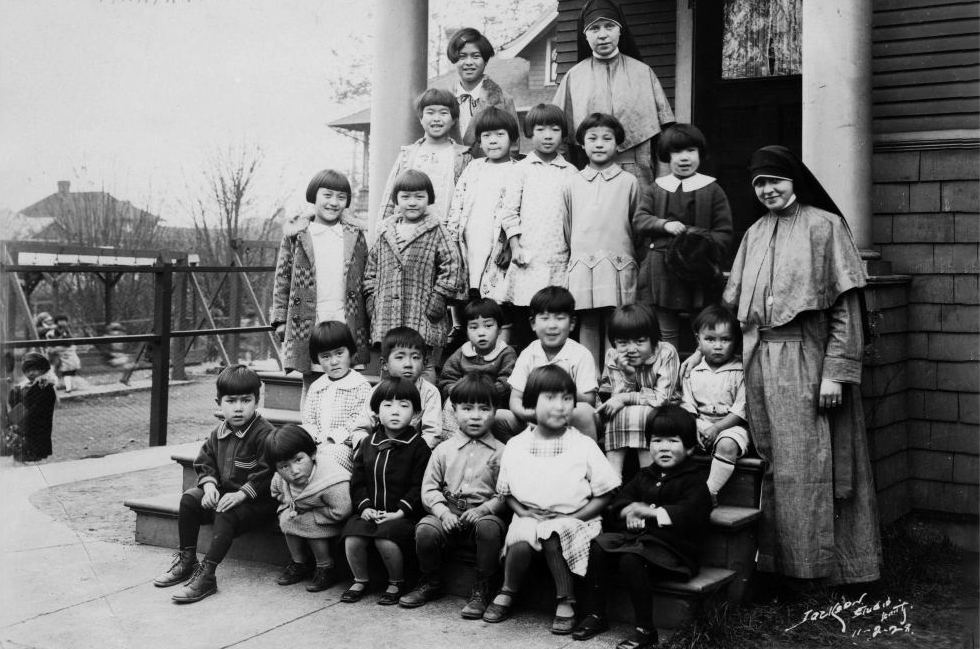 Bishop Junger was followed, in 1896, by Bishop Edward J. O'Dea, who transferred the seat of the diocese from Vancouver to the booming port city of Seattle. On September 11, 1907, the diocese was officially renamed after its principal city. On December 22, 1907, Bishop O’Dea dedicated a new St. James Cathedral on Seattle’s First Hill.

The local church continued to grow rapidly. Holy Names, Providence and Dominican sisters founded schools, orphanages and hospitals throughout the diocese. Benedictine monks from Germany started St. Martin's College in Lacey in 1895. The Jesuits established high schools for boys in Seattle and Tacoma, as well as a college in Seattle. Between 1903 and 1915, St. Frances Xavier Cabrini and her Missionary Sisters of the Sacred Heart founded a school, a hospital and a home for children. In 1920, the Maryknoll Sisters arrived in Seattle to set up a school for Japanese-Americans that later became Our Lady Queen of Martyrs parish.

Lay Catholics have always been deeply engaged in this local church. The first state council of the Knights of Columbus formed in Seattle in 1902. The Seattle Council of Catholic Women was created in 1919, and the first conference of the Society of St. Vincent de Paul was established at St. Benedict Parish in Seattle in 1920. In 1935, a group of Seattle laymen founded the Serra Club, which become an international organization dedicated to promoting vocations to priesthood and religious life.

Bishop O’Dea died in 1932, and was succeeded by Bishop Gerald Shaughnessy. An able administrator, Bishop Shaughnessy saw the local church through the Great Depression. Bishop Shaughnessy suffered a disabling stroke in 1948 while on his way back from a meeting of the bishops of the United States. Bishop Thomas A. Connolly of San Francisco was appointed his coadjutor, succeeding to the see in 1950 upon the death of Bishop Shaughnessy.

In 1951, Bishop Connolly became the first archbishop of Seattle when Seattle became an archdiocese on June 23, 1951. Archbishop Connolly was a builder who renovated St. James Cathedral, built St. Thomas Seminary and opened a host of new schools and churches. The archbishop became well-known for his advocacy of civil rights and just wages. Archbishop Connolly attended three of the four sessions of the Second Vatican Council (1962-65) and oversaw the implementation of many of the Council’s reforms.

Archbishop Connolly retired in 1975 and was succeeded by Bishop Raymond G. Hunthausen of Helena, Montana. Under Archbishop Hunthausen, the church in Western Washington worked with other denominations and faiths, championed justice and peace efforts, fostered lay ministry and further implemented the reforms of the Second Vatican Council. Archbishop Hunthausen attracted international attention for his tax protest in opposition to the nuclear arms race and for a Vatican investigation of his ministry. 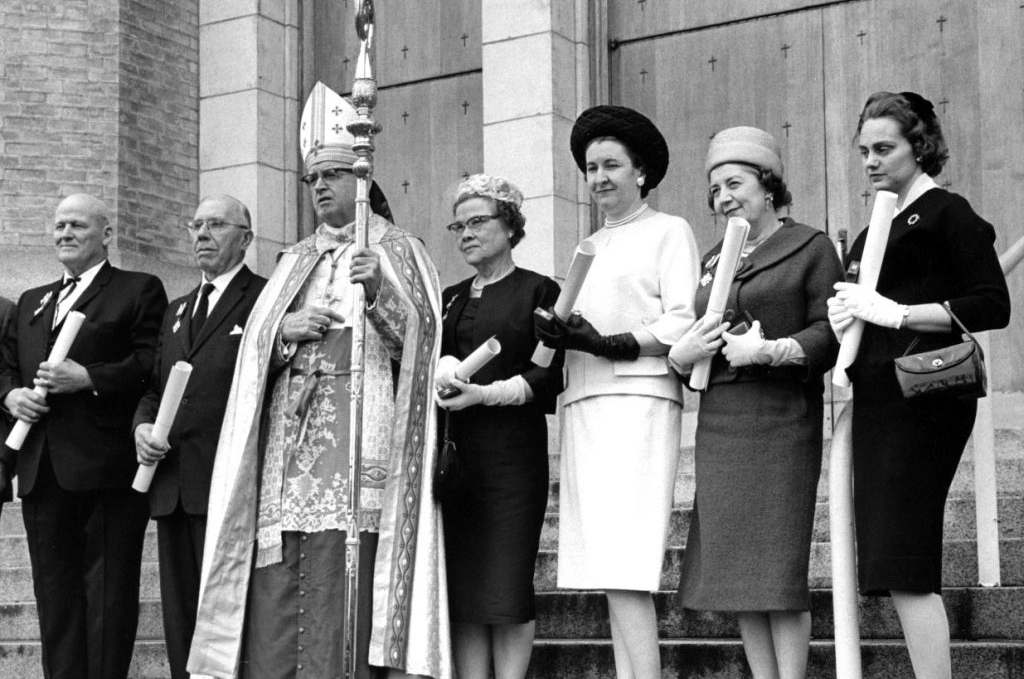 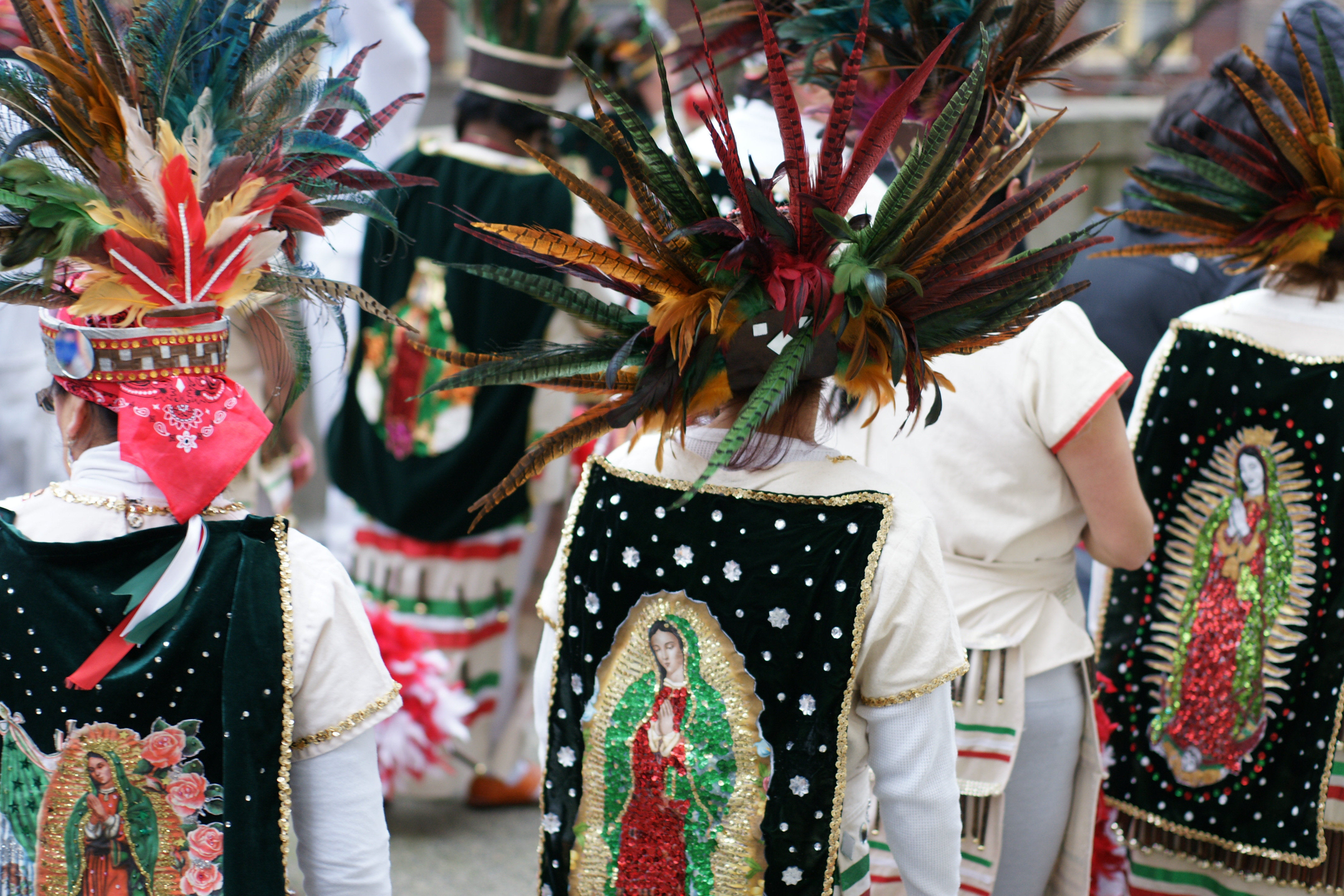 In 1987, Bishop Thomas J. Murphy of Great Falls-Billings, Montana, was named coadjutor archbishop of Seattle, succeeding to the see when Archbishop Hunthausen retired in 1991. Archbishop Murphy emphasized stewardship, religious education, vocations to priesthood and service to immigrant Catholics and economically depressed timber communities. He also established celebrations to honor the multicultural communities of the Archdiocese, including Madre de las Americas, an annual celebration with the Latino communities of the Archdiocese of Seattle, and Simbang Gabi, a Filipino Advent celebration. Archbishop Murphy was diagnosed with leukemia in December of 1996 and died on June 26, 1997.

On October 28, 1997, Bishop Alexander J. Brunett was appointed the eighth bishop, fourth archbishop of Seattle. Archbishop Brunett’s years as archbishop were years of expansion, including the development of the retreat center (now named in his honor) in Federal Way and the creation of the Fulcrum Foundation to support Catholic education in the archdiocese. Archbishop Brunett also created new archdiocesan policies and wrote a pastoral letter on the inclusion of people with special needs in parish life and liturgy. Archbishop Brunett retired in 2010 and died on January 31, 2020. 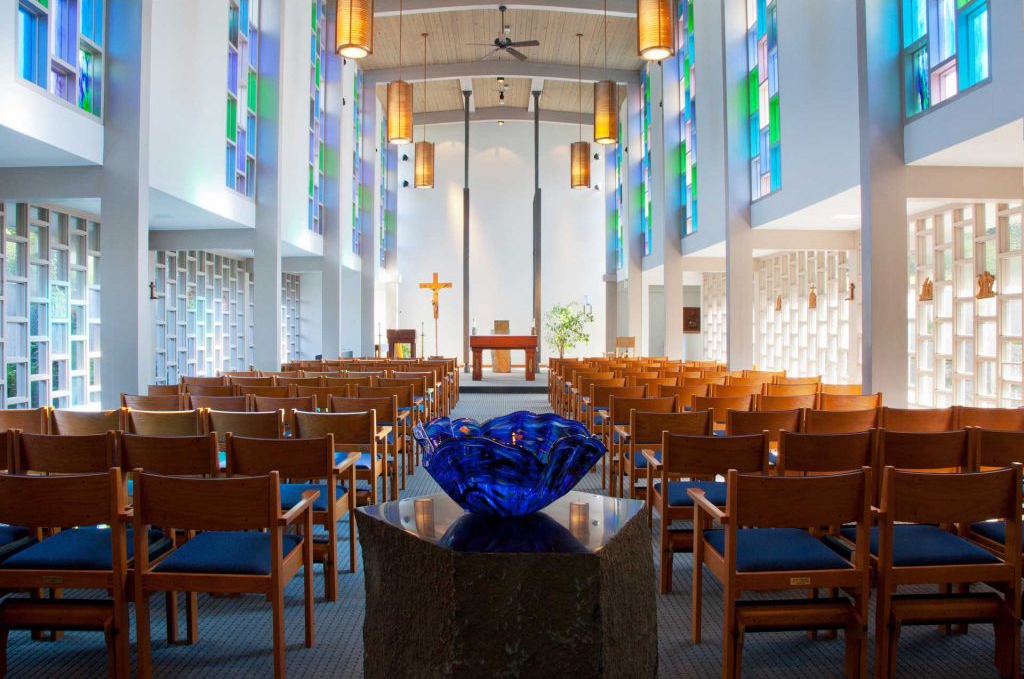 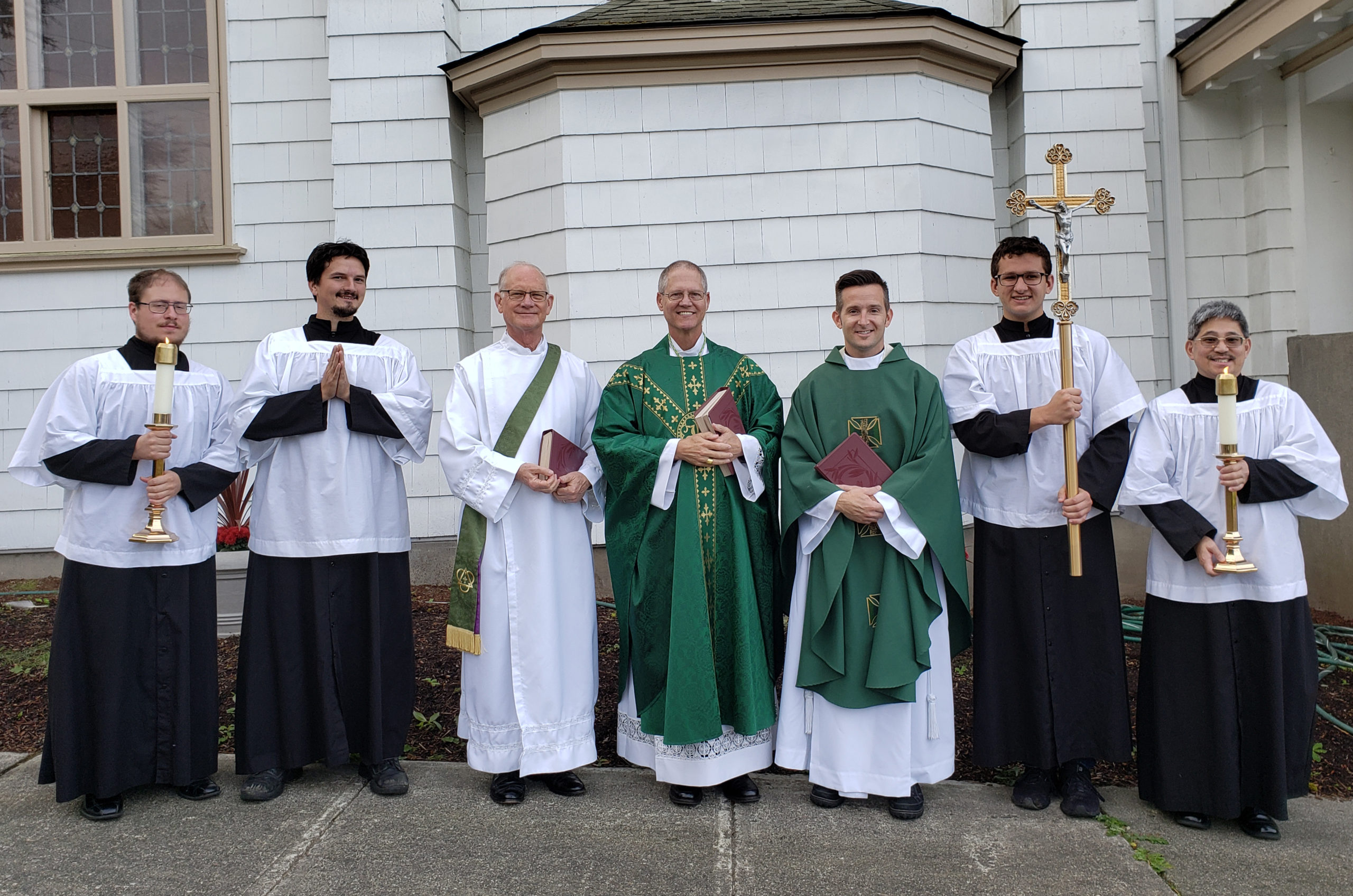 On September 16, 2010, Archbishop J. Peter Sartain was appointed successor to Archbishop Brunett. During his nine years as archbishop, he expanded Hispanic ministry and ministry to youth and young adults. He also fostered vocations to the priesthood. Archbishop Sartain retired early after several serious back surgeries, which made it more and more challenging for him to keep up with his demanding schedule. On April 29, 2019, Archbishop Paul D. Etienne was named coadjutor.  He was named Archbishop by Pope Frances on September 3, 2019.  To learn more about Archbishop Etienne, click here.

Meet the past bishops

Learn more
This site is registered on wpml.org as a development site.